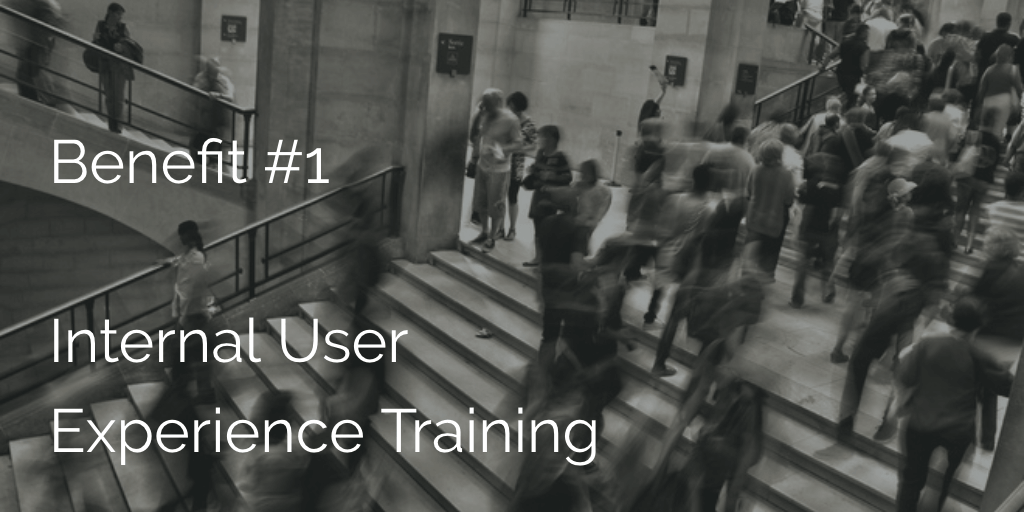 In last week’s edition of my Product Design Newsletter, I wrote in detail about conducting regular benchmark usability tests. The described process worked quite well within my agile software development team to ensure the ongoing high quality of our software. If you haven’t read that article just yet, go here and read about the process behind monthly benchmark user testing.

As the data from months of these benchmark tests accumulated, my team realized there were some additional positive, though unintended, consequences of the new testing schedule. Once these were realized, we were able to leverage these and attain even more results from the regular testing schedule. These results included:

Today, I’ll discuss how we realized and leveraged the first of these three benefits, internal user experience training. Be sure that you join my free and weekly product design newsletter to read first about the next two benefits.

The regularity of benchmark user testing provided the design team with a somewhat rare level of comfort and familiarity. In the world of agile UX design, the daily pace can be breakneck – leaving those folks involved busy. Very busy. A sole designer is often responsible for supporting a much larger number of developers. The ratio was as large as one to fifteen on many of my past teams.

A sole designer is often responsible for supporting a much larger number of developers. The ratio was as large as one to fifteen on many of my past teams.

Generally, user tests are put together as new prototypes and features are formed by design. There is rarely the luxury of having a full-time team member committed to their planning, scripting and follow through. Everyone contributes to the testing and wears many hats ranging from feature designer, test moderator and session note-taker. This all depends on a variety of circumstances and everyone’s workload.

The benchmark tests differed from our usual, admittedly chaotic, flow of things primarily in that they became quite predictable. Everything from the format, rhythmic timing schedule, prewritten script and note-taking forms were all set in stone. The pre-work was completed and ironed out well before the time for testing came around each month. This was realized as a massive opportunity for training within the team.

We leveraged these regular testing sessions and taught other designers in every way possible using them. New team members, or those of us simply new to the notions of agile UX testing, were taught how to properly prepare for, conduct and record the findings of user testing sessions.

We leveraged these regular testing sessions and taught other designers in every way possible using them.

This informal training, paired with more curated books on the subject, quickly transformed our design team. We became a well-oiled machine comprised of professional, seasoned and empathetic agile UX designers.

We increasingly voiced the need’s of our target demographic at each opportunity. There is no stronger voice than that of your user. Create the opportunity and forum for your target users to be heard and train your team to simply listen.

Create the opportunity and forum for your user’s to be heard and train your team to simply listen.

The opportunity to train my team in the acts of user testing sessions was just one of the three primary, unintended consequences of benchmark user testing. Look out for next week’s post on user testing awareness. I’ll get into all of the details and methods that my team employed to spread the fire of user testing methods throughout the organization.